roast chicken recipes beyond the dish covered in this post. I’ve been a subscriber since 2005

, and I thumbed through my back issues for other CI takes on chicken. Here’s what I found (the quotes are the subheadlines for each recipe story): 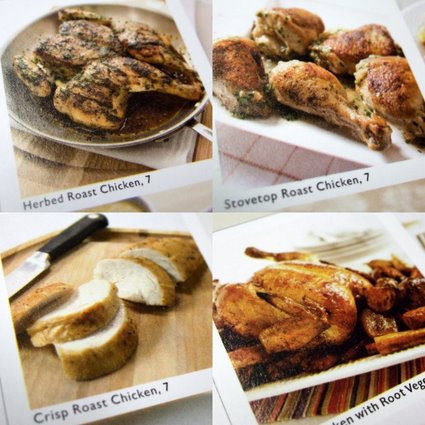 Clockwise from top left: Herbed Roast Chicken, Stovetop Roast Chicken, Roast Chicken with Root Vegetables, and Crisp Roast Chicken. In case you’re not familiar, CI publishes color thumbnail images of the dishes in the back inside cover the magazine. The interior of the mag is black and white.

I’m sure you could find these issues at your library or via eBay. Or they could be floating around on the Intercom

, but CI keeps a pretty tight grip on its content; its site primarily is for paying subscribers.

Of the aforementioned recipes, I think I’ve only made the chicken with veggies. It’s been a while! MVH has a rotisserie

, and that’s been our favorite way to make chicken.

Do you have a fave roast chicken recipe? Does it involve brining the bird? Please share!

BTW: Does anyone else think it’s weird that CI had three roast chicken recipes in one year (2008)?