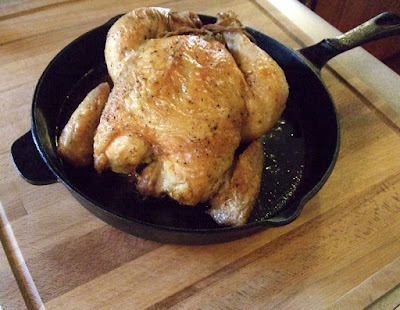 The bird in question.

“Why is the kitchen filled with smoke

I had just returned home from a bike

ride. MVH was watching Paul and minding the Weeknight Roast Chicken, as dictated by Cook’s Illustrated

. And the lower level of the house was honest-to-goodness hazy.

The M.O. of this recipe is roast chicken in a hurry. The subheadline of the recipe story reads: “If you can plan ahead, by all means brine or salt your bird. But when you want dinner on the table in an hour, you need a different way to get juicy, tender chicken.”

So CI promises chicken in an hour

, but if you add up the minutes in the directions, you’re not getting there. The chicken roasts at 450 degrees for 25 to 35 minutes; you check the bird’s temperature

; then turn off the oven and leave it alone in the oven for another 25 to 35 minutes. If your chicken is on the small side

, you’re up to at least 50 minutes when the directions call for allowing the bird to rest for 20 minutes. Last I checked, 50 plus 20 is 70 minutes. Moreover, this “hour” doesn’t include the pre-oven prep of rubbing down the chicken with salt, pepper, and olive oil.

is a big obstacle. Yes, it takes a few hours, but they’re hands-off, overnight hours. Remembering to brine is the tricky part. Once you’ve brined, you have another hour or two of hands-off cooking while the chicken is in the oven. I’m more interested in the hands-off cooking characteristics of roast chicken than its speed, but maybe that’s just me.

Enough bellyaching; here’s what I liked about the recipe! The chicken was very moist and flavorful, both dark and white meat. The skin wasn’t soggy, and the bird was very nice looking. I also loved the dead-simple seasoning (salt and pepper) and prep (rub in olive oil and S&P). We also made the tarragon-lemon pan sauce

, and it had a bright, zingy flavor that paired well with the savory meat. I have to give CI credit for rocking the pan sauce better than anyone; the magazine’s sauces never disappoint. 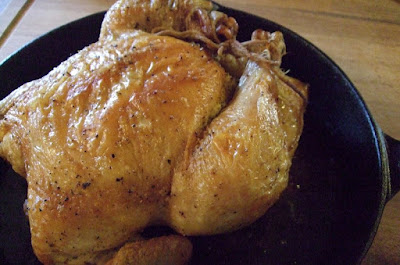 We found lots of ways to serve the chicken. Roasting it was just the beginning.

Will I make this again?
Like I said before, brining doesn’t really bring me down, so I’d rather roast the chicken longer at a lower temp than have my house filled with smoke, especially when I want roast chicken in the winter and can’t open windows.

How long did it take?
We were closer to 35 plus 35 plus 20 minutes for resting, which is closer to 90 minutes. It took about 10 minutes to prep the bird, but pre-heating the oven was at least 15 minutes. Getting to 450 takes a while.

Servings and leftover situation?
The first night, MVH and I each had a serving. The following night we each had another serving with the pan sauce. Over two more nights, we made three chicken-black-bean-and-cheese quesadillas

; I had a serving of chicken salad

, and MVH had another serving of chicken and pan sauce. It was a biggish bird, but we weren’t taking very big servings. We’re pretty good at stretching and re-imagining entrees.

Cost of meal?
I had kosher salt, pepper, and olive oil in my pantry. The chicken, which was about four-and-a-half pounds, was $11.35. For the pan sauce, the shallot was 38 cents; the Dijon mustard was $2.99; I had butter; the tarragon was $2.29; and a lemon was 75 cents. I actually think the grocery charged me the wrong price for the chicken broth, which should have been about $4. The total of these ingredients is $21.76, but remember that I used only a fraction of the mustard, tarragon, and broth. The bulk of the cost was the chicken, and we got nine reasonable meals out of the bird.

A cost per serving between those two figures is pretty darn good. Viva El Gallo