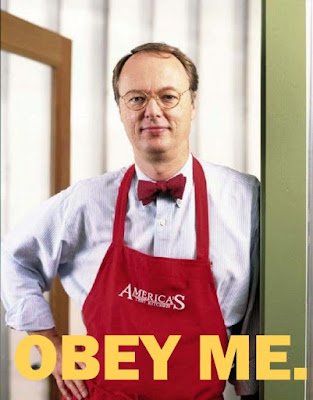 Christopher Kimball is founder and editor of Cook’s Illustrated, and you’ve probably seen him lurking around “America’s Test Kitchen.”

This may be the best OR the worst idea I’ve had in a long time. I aim to cook each dish in the September/October 2011 issue of Cook’s Illustrated

,” which you can watch on PBS and Create TV. Cook’s Illustrated is hard core; it’s ad free and printed in black and white. The editors get behind the science of food and review tools and ingredients with extreme prejudice. It’s delightfully obsessive compulsive.

The magazine is published six times annually, and I want to make this issue’s 10 dishes before I receive the next issue, which should be in about eight weeks. (I got September/October last week.) It’s the first issue in a long time that I perused and thought, “Geez, all of this stuff looks really good.”

So here’s what’s on the menu:

I want to be honest about how long it takes me (and MVH) to make each dish, how the leftovers stand up, how many servings the dish provides, and, to the best of my ability, how much the meal costs.

I will obey CI’s directions and ingredients list as best I can, but I will allow for appropriate flexibility. I don’t have a test kitchen, sous chef, or time to track down obscure ingredients

. I have a baby, and I’ll be doing MBA coursework during this challenge (both factors why this may be a terrible idea). But what the heck, right? Ha.

Do you subscribe to CI? What turns your crank in this issue? Wanna play along? I’m starting with the roast chicken this week. Wish me luck!