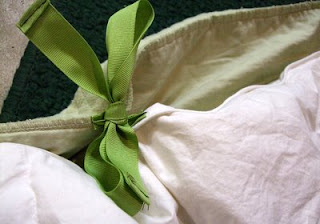 All tied up and much improved.
It’s been a cold spring in Milwaukee. It took me a while to finally drag the duvet off my bed.

But when I did, I made a fix that I had been meaning to conduct for a long time.

Let’s talk duvet pros and cons —
Pro: Super warm when stuffed with a down comforter. (This is why I bother with a duvet.)
Con: Down comforter shifts downward, making the top of the duvet thinner (because it lacks the comforter “stuffing,” if you will) and less warm around your shoulders.
Pro: Can remove comforter and stretch season of duvet into warmer weather.
Con: Tough to shake out duvet and comforter because the blanket unit is heavy. Consequently, duvet can look lumpy.

When I get down to it, the thing that drives me bananas about my duvet is that the comforter shifts inside it.

Following is my remedy for this problem: sewing ties to the inside the duvet and to the comforter. 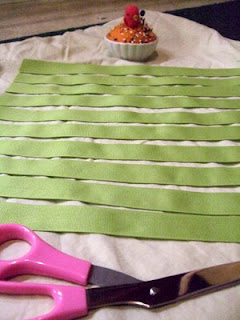 These ribbons will secure the comforter to the duvet.

I used a fairly heavy grosgrain ribbon about an inch wide and cut into ties about a foot long. (I would check the lengths on this stuff, but to be honest, this bedding now is in storage.) Longer ties might be easier to secure.

I made 10 ties in all, five on the duvet and five on the comforter. I thought an odd number would be more secure because the centers of the blankets would be tied up. 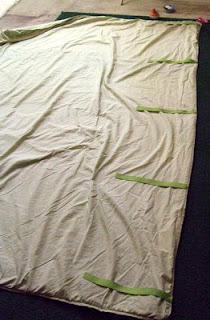 The ribbons are pinned to the duvet.

I first spread my duvet, turned inside out, on the floor and found its center by folding it in half. I pinned a piece of ribbon in the center. Then I pinned the ribbons on the far edges closest to the corners. Last I eyeballed positions for the final two ribbons, located between the center ribbon and the edge ribbons.

I don’t think it matters much whether measurements are dead-on, because once you set locations for one set of ties, you just need to match them to the ties on the other blanket. 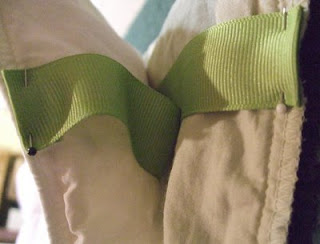 Close-up view of the matched comforter ties (left) and the duvet ties (right).

When I sewed the ribbons to the duvet and comforter, respectively, I made sure to fold under the raw edges (to prevent fraying) and to backstitch. Backstitching is especially important because the duvet and comforter is a heavy unit, and weak stitching could liberate your ties. Not fun. I also sewed the duvet ties to the seam allowance (which offers two layers of fabric instead of one) because the extra fabric is a stronger anchor for the ties.

This whole project probably took me about half an hour to complete, and the trickiest part was manipulating the massive duvet and comforter around my sewing table.

I’m looking forward using to my improved bedding when the temperature falls again. But I think I can struggle through a lovely Wisconsin summer first. If it will only get here!