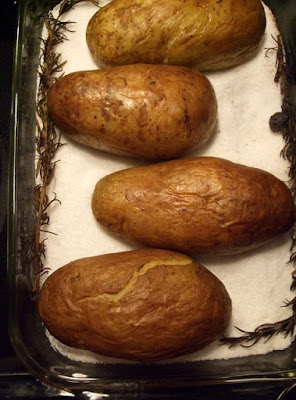 Baked on a bed of salt.

“If someone told me they were a baked-potato aficionado, I’d turn tail,” I told Mark while making this recipe. “It’s like saying, ‘Hi, I’m the most boring person you’ll meet today.'”

So now you know where I stand on baked potatoes.

It’s not that I don’t like baked potatoes. I ate a lot of them early in my pregnancy because they are filling and mostly benign tasting. (This was when all food smelled like onions. I was so sad I didn’t like food. So very, very sad.) In non-pregnant times, I view baked potatoes as a medium for salsa and sour cream.

This being said, this recipe from Cook’s Illustrated yielded the best-tasting baked potato I’ve ever eaten. 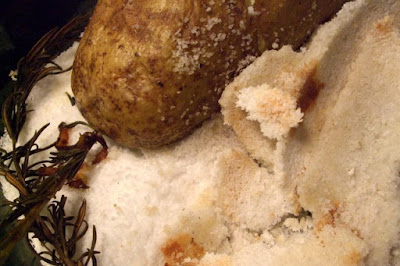 The salt formed a crusty shell around the potatoes.

Even though these are the best baked potatoes I’ve had (restaurant or no), I’m not burning to make them again anytime soon. Personally I don’t need many baked potatoes. I could, however, see them being a nice addition to a steak dinner.

What do you think? Love your baked potatoes? Have a surplus of salt? Lemme know!