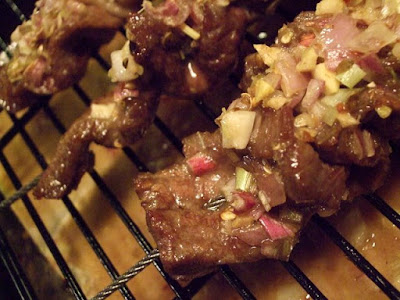 The article reads, “American restaurants have sapped the magic from this Thai street-food favorite with flavorless meat that’s either mushy or overcooked.”

Magic meat on a stick? We’ll see about that.

Following are my notes on the experience:

After the beef is marinaded, it’s woven onto skewers and cooked, with three pauses for basting. It goes fast; the skewers are ready in about seven minutes.

“Grilling”: The recipe calls for grilling the beef (charcoal or gas), but it was too dark by the time we got around to making dinner. Instead we made the skewers with the broiler. The beef was cooked to my liking (pink in the middle), but I couldn’t help but miss a little smoky char on the skewers. Next time. 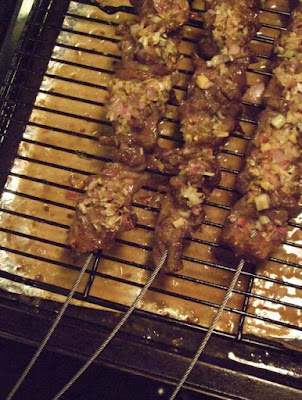 Fired up? A perennial issue when cooking “ethnic” recipes by CI is the lack of heat. CI is spot-on for any North American or European food, but get away from those continents and meals feel faded. This Thai dish was not spicy. I don’t have a super-high tolerance for heat, but I was hoping for a little sweat on the brow. No such luck.

Encore? Yes, I would make the satay skewers and peanut sauce again. Next time, they’re going on the charcoal grill, and I think I’ll turn up the heat with a chili pepper or more red pepper flakes.

Have you noticed that CI whiffs on ethnic cuisine? Think I’m off base? Let’s talk.