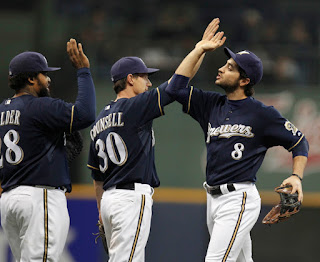 (From left) Prince Fielder, Craig Counsell, and Ryan Braun are gearing up for the postseason, along with the rest of Milwaukee! Photo by Rick Wood via Milwaukee Journal Sentinel.

Don’t know if you’ve heard, but the Milwaukee Brewers, my hometown baseball club, are the National League Central champions. THIS IS A BIG DEAL.

I repeat: This is a big deal.

The Crew won the NL Wild Card in 2008, but the last time they won a division (American League East at the time) was 1982. It’s been a long time, and people are psyched. Milwaukee is a great baseball town!

In the spirit of all things Brewers, I thought I’d show off some cool handmade Brewers gear. The team has been a source of inspiration for me and my friends. Observe! 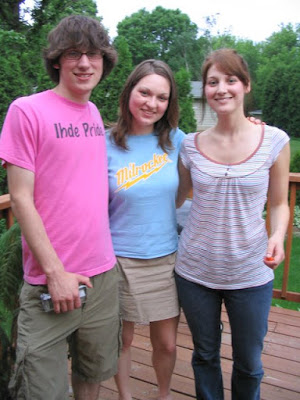 Erin, center, celebrates her 25th birthday in 2006 with her brother, Jake, and sister, Brianna. Notice my sweet “Milrockee” T-shirt. That logo was devised and executed by me and MVH. It’s based on the Milwaukee Tool logo. Lightning? Yes, please. (Click photo to enlarge.) 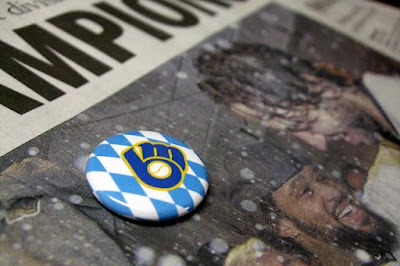 My friends, JC and RC, (who were responsible for the Dangerbaby quilt for Paul) handed out buttons as wedding favors, and one of the designs was this excellent accessory — the beloved Brewers mitt on the Bavarian flag. It makes a lot of sense: beer, Milwaukee, Germans, Gemuetlichkeit. Tailgate at Miller Park sometime and you’ll see what I mean. (Click photo to enlarge.) 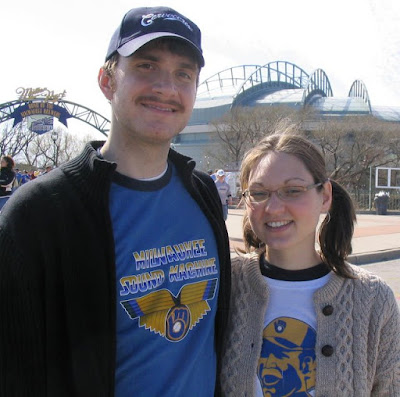 MVH and Erin show off their handmade Brewers T’s on Opening Day 2007. Mark was the one-man “Milwaukee Sound Machine,” and my T featured an illustration of Robin Yount and the phrase “Nice Yountstache.” We mostly have MVH’s Illustrator and Photoshop skills to thank for these outstanding tops. Unfortunately, the iron-on transfers did not hold up very well, and the shirts were damaged in the wash. Do you have a fave transfer brand? Please share! (Click photo to enlarge, although I don’t blame you if you don’t want a closer look at Mark’s moustache. Yikes.) 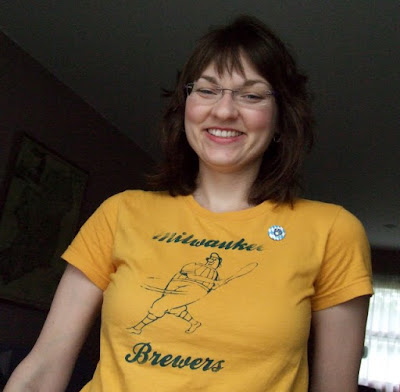 Erin sports the Beer Barrel Man T-shirt. The history of the Beer Barrel Man starts in the ’40s with his appearance for the minor-league forerunners of the Crew. This top was created by my pals, Ryan and Kindra, who blog over at Love & Adventure. They are talented screenprinters and occasionally surprise us with excellent T’s. (Click photo to enlarge.) 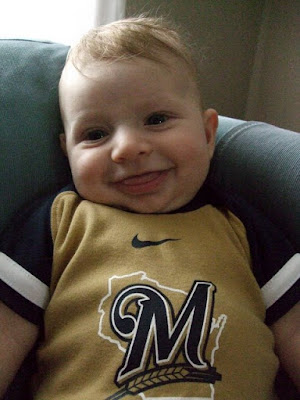 Paul embraces the new-school logo. OK, so this isn’t handmade Brewers gear, but how could I resist sharing this pic of my tiny fan? True story: When I told MVH I was pregnant, I gave him this Brewers onesie and said, “It’s for the postseason, next year.” It was Sept. 23, 2010. Exactly one year later, the Brewers clinched the NL Central.

What have you made to support your team? Please share! Between the Brewers, Packers, and Wisconsin (my alma mater!), it’s a great time to be a fan in Wisconsin!