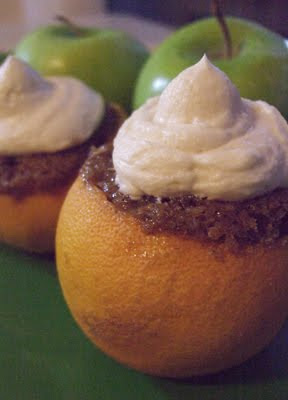 Surprise! There’s a cupcake in my orange peel.

I relish the contrary. Maybe it’s the Gemini in me. I strive to be unpredictable and to challenge and expand what I know.

When the November IronCupcake:Earth Apple Challenge was announced, I put on my thinking helmet to come up with a way to turn baking with apples on its ear.

I love language and wordplay. I ran through common phrases that had “apple” in them (an apple a day, bad apple, etc.) for inspiration. I paused on “comparing apples to oranges.”

While I love apples, November is the tail end of apple season. Next on the fruit calendar are citrus fruits, which provide a wonderful, peppy contrast to a lot of heavy winter food (more evidence of my love of opposites).

Thus my plan was born: to bake apples to oranges — opposites with a nod to the changing season.

These cupcakes are very moist, thanks to the applesauce. But they also have that winter spice that shows up in desserts such as gingerbread. It’s rich, deep, and warming, with a little bit of bite. When I make these cakes again (MVH has made the request), I’m adding ground cloves. 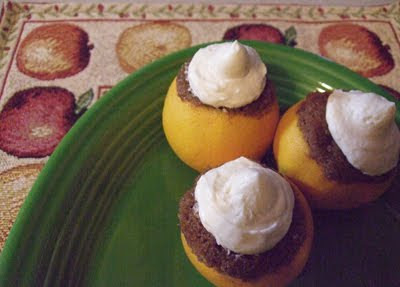 The cinnamon makes the cupcakes a flecked brown.

These lovelies could be a culinary (and visual) delight at a holiday buffet, and I think kids would be especially amused by a cupcake baked in an orange peel.

Voting for the apple challenge begins at 8 p.m. Friday, Nov. 27 at Nobody Puts Cupcake in a Corner. I’ll give you a heads up in a post when voting starts and finishes.

I am competing for the following fabulous goodies:

Baker’s note: there are three parts to making these cupcakes: applesauce, the cupcake, and the frosting. The recipes are in order of operation.

Makes about 2 cups of applesauce.

Place apples, cinnamon stick, sugar, and water in a small saucepan. Cook the apples covered over low heat for 10 minutes until simmering. Stir occasionally. Remove lid and simmer for 10 more minutes until apples are soft. Lightly mash the apples to your discretion. Fish out the cinnamon stick before serving. 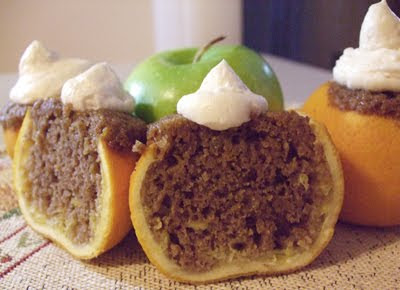 Use a spoon to dig into these apple cupcakes.

Makes 6 cupcakes. You will need 7 oranges for this recipes: 1 orange will be zested, and 6 others will be hollowed out for the cupcakes.

Measure flour, baking soda, salt, and cinnamon into a small bowl. Place a sifter or fine-mesh strainer over the mixing bowl of wet ingredients. Pour the dry ingredients into the sifter and sift about half of the contents into the wet mixture.

Beat half of the dry ingredients into the wet ingredients. Scrape down the bowl with a spatula.

Sift the remaining dry ingredients into the wet mix. Beat together. Stir in orange zest.

Wrap the orange peels in aluminum foil. This will prevent the peels from burning.

Scoop the batter into the peels. (My peels, which were rather small, were filled about 2/3 of the way to the top. I had some overflow, but nothing major.)

Place the orange peels on a baking sheet. Bake for about 25 minutes or until a toothpick inserted into the largest cupcake is removed without crumbs.

Pour half and half into a small saucepan. Add sliced ginger. Cook over low heat until simmering, about 1o minutes. Turn off heat, and allow half and half to steep for about 50 minutes. Strain liquid to remove ginger solids.

You will have leftover half and half. I plan to use it in tea, coffee, and oatmeal.

8 Comments on Eats of Eden: Apples to oranges