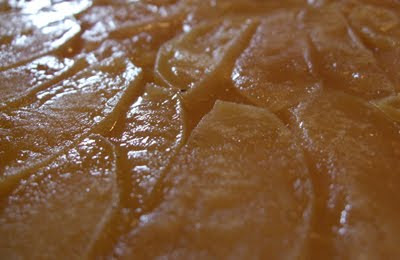 There’s a meditative quality to peeling and slicing apples. The straight peeler blade leaves flat paths over the curved surface. I’m like a gem cutter, teasing out facets. I create edges where there were none before.

Despite blogging about Julia Child’s tarte tatin, my expectation for the dessert was pretty much an upside-down apple pie. The flavors and textures of the apple dishes, however, are quite disparate. 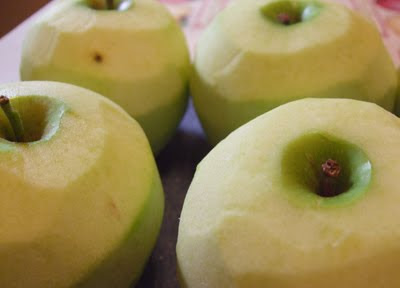 The peeler leaves edges on a curved surface.

Tarte tatin is nutty and caramelized, thanks to an obscene amount of butter. Because the crust is baked atop the tarte, it’s lighter and more crispy than a regular pie crust. In a traditional single-crust apple pie, the crust is a dense barrier between a fork and a plate. It offers resistance. You cock your elbow a bit to knock off a bite of pie. With tarte tatin, the crust flakes away. It’s a light and savory counterpoint to the rich fruit.

Think of it this way: tarte tatin is your sophisticated aunt. She is worldly and a little mysterious. Apple pie is your mother. She is familiar and reliable. But at their core (pun intended), these sister desserts come from the same place: apples. 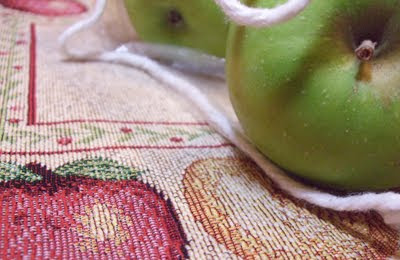 Greening apples are a sturdy variety good for baking.

I understand why Julia recommended serving creme fraiche with tarte tatin. The semi-sour dairy would cut a bit of the caramel flavor. (It’s funny how one rich food will make another seem less rich!)

The tarte will sink a lot, but don’t be worried about it looking small. This is a small-slice dessert.

Filling:
6 Greening apples
Juice of one lemon
1/2 cup sugar, plus more for sprinkling (about another 1/2 cup)
1 stick of softened butter, plus about 3 tablespoons butter, melted

Preheat the oven to 425 degrees Fahrenheit. Make your pastry. Get to point where the crust is chilling in the fridge for at least 30 minutes. 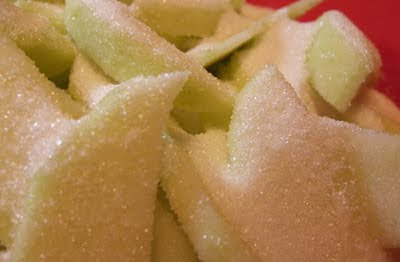 Peel and thinly slice the apples. Squeeze the juice of one lemon over the sliced apples. Toss apples with 1/2 cup sugar. Let the apples sit while you prepare the cast iron pan. (I used a 9-inch pan.) 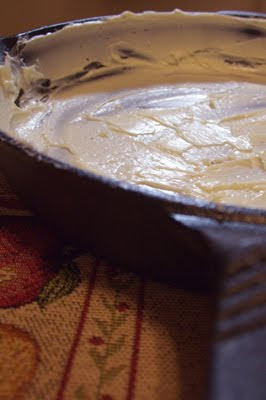 A stick of butter is spread in the pan. This is how you prevent food from sticking to cast iron.

Sprinkle about 1/3 inch of sugar over the bottom of the pan. Butter + sugar = happy.

Now, because the pan will be inverted (the bottom will be the top of the tart), arrange a layer of apple slices in a nice fan pattern. It’s OK to overlap slices a bit. This is the top of your tarte, and you want it to look fancy. 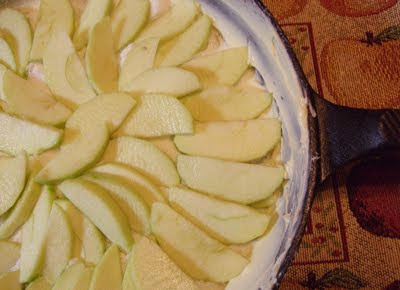 Apples are fanned over the bottom of the pan. This layer will become the top of the tarte.

Drizzle some melted butter over the apples. Sprinkle with a touch of sugar. Add more apples. The subsequent layers don’t have to be fancy. A pie-filling-like jumble is a-OK. Drizzle more butter and sprinkle more sugar after each layer of apples. The pan should be almost too full of apples.

Roll out the crust. Drop it atop the apples and trim overhanging dough. Cut slits in the crust to allow steam to escape.

Place pan over a hot burner for about 6 minutes. You’re starting to caramelize the butter and sugar. The filling will start to bubble, and the crust will wiggle. It will smell really good, but don’t stick your face too close to the steam vents. (Trust me on this.) 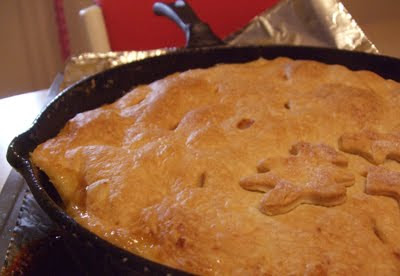 See my lovely crust leaves? As I trimmed the extra dough from the pastry, I thought it would be pretty to decorate the crust with shapes cut from the surplus. I got out an oak leaf cookie cutter and went to town. As the tarte was sitting on the stove caramelizing, I proudly pointed out to MVH my pretty dough leaves. “See,” I said. “Just like how your mom decorates pies.” “Aren’t you going to invert the tarte?” he asked. Uh, duh, Erin. I laughed. “Good point,” I said. I will tell you that even though the leaves were hidden, they were an extra crispy surprise when I ate a piece of tarte. It’s kind of like wearing fancy underwear — no one knows but you, and it brings you a secret delight — and that’s all that matters.

Put the pan on a baking sheet (to catch any overflow), and send it into the oven for 30 minutes. Bake until the crust is a gorgeous golden brown and slightly puffy.

Allow the tarte to cool for at least 20 minutes before you invert it on to a large platter. You DO NOT want to mess with a hot, heavy pan. PLEASE be very careful.

Cover the edges of the tarte platter with aluminum foil to protect it from the broiler. Broil the top of the inverted tarte until it is dark brown. Watch the broiler like a hawk; with great power, comes great responsibility to not set your food on fire. You’ve worked too hard to burn your tarte! 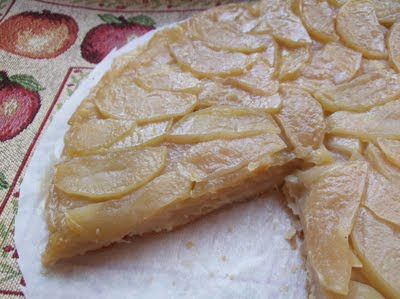 I didn’t broil the top of my tarte. Mostly, it’s because MVH was giving me hungry-for-dessert eyes and I got distracted and forgot to take the last step. It’s OK, though, because I don’t have a platter big enough for a tarte made in my cast iron pan. I inverted the tarte on a cookie sheet that was covered with a piece of parchment paper. Instead of inverting the tarte with one hand (a la Julia), I placed the parchment paper and cookie sheet on top of the tarte, then I used both hands to flip the sheet and pan over. I couldn’t broil the tarte anyway because it was sitting atop paper.

Remove the foil, slice ‘er up, and serve with creme fraiche and Vouvray. Merci beaucoup, JC!

3 Comments on Eats of Eden: Rich and French