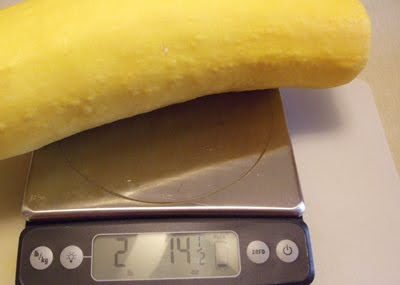 Are you hungry? Like right now? For something light and vegetabley? Have about 6 pounds of summer squash in your fridge?

My interest in cooking squash is decreasing more quickly than my squash stockpile. I was rooting around in my freezer this weekend and found shredded zucchini from last summer! I thought I baked through all of it! Bah. How embarrassing. 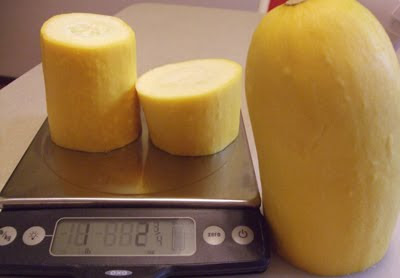 The squash on the scale is what I used for the warm summer squash salad. At right is what’s STILL left of Squashosaurus.

In my first Dear Zucchini Diary post, I listed several zucchini recipes I wanted to plow through. I’ve made five zucchini recipes (one was not listed originally) and written about four. I made the lasagna tart, but I have some big ideas (huge, I tell ya!) about how to improve the recipe. Hold tight and you shall be rewarded, sweet readers. I will finish the series with my favorite recipe: KAF’s chocolate zucchini cake. It will be worth the wait; promise. Then I’m going to stop and probably just make a ton of muffins and quick bread, and I’ll spare you those posts. You’ve been such good sports.

But back to the zucchini dish at hand: warm summer squash salad. If you have 15 minutes, you’ve got a light meal or a tasty vegetable side. 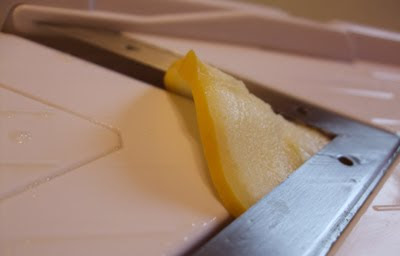 Sliced thin with a mandoline.

The salad has an Asian note. The twinge of vinegar in the nose reminds me of a sweet-and-sour stir-fry. It would be perfectly at home over sticky rice.

But the thyme provides a continental karate chop of savory. The original recipe called for oregano, but I had snipped a bunch of thyme this week, and it was taking up space on my counter. (Mostly I didn’t feel like clipping oregano from my herb garden in the rain.)

The recipe doesn’t call for salt or pepper, and I was skeptical at first. But the balsamic vinegar, herb (whatever you want to roll with), and garlic add enough flavor to the blank-slate squash. 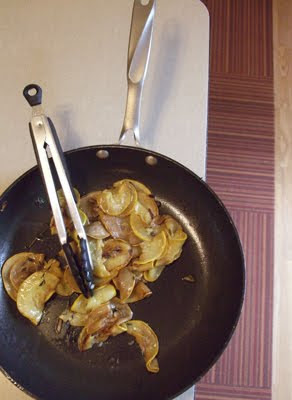 Thin squash medallions are quick-cooking and soak up strong flavors.

The recipe originally called for twice the ingredients (2 pounds of squash, etc.). I cut everything in half because I was cooking for fewer people. I think my changes would yield three generous side portions. (So yes, I doubled a cookie recipe and cut a veggie recipe in half.)

Warm oil over medium-high heat in a large skillet until shimmering. Add half the garlic, and let it sizzle for about a minute. Add half the squash to the pan. Give it a good stir or two to coat it with the oil and garlic. Let it cook about 2 minutes without stirring. Add 1 teaspoon capers. Stir it, and let it cook another 2 minutes. You want the squash to be wilted and slightly browned on the edges. How quickly this happens mostly depends on how thin your slices are.

Transfer the lightly browned squash to a plate. Drop the other half of the squash in the pan. Add the rest of the garlic and 1 tablespoon vinegar. Toss in about half the thyme sprigs; scrape the tiny leaves from the other sprigs into the pan. Give everything a good stir. Let it cook for about 2 minutes. Stir; cook for 1 minute or until the squash is almost as brown as the first batch. 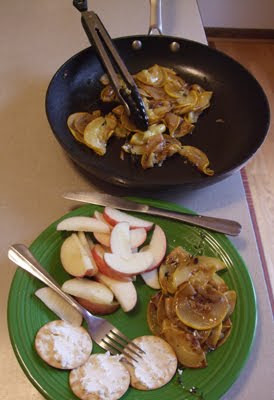 Lunch is warm squash salad, goat cheese on crackers, and a sliced Honeycrisp apple. It’s a tasty mix of textures. The apple is a preview of my next ingredient series!