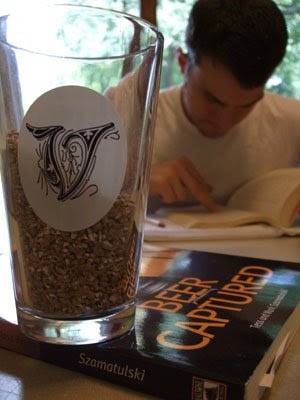 MVH checks the beer recipe before we start brewing.

Pots. And pails. Home brewers’ most important supplies are pots and pails.

I was a little surprised by how many vessels my husband, MVH, and I used when we brewed a batch of American wheat recently.

I had never been through the whole process at once. I weighed ingredients with one batch. With another, I sat in the garage and watched a kettle boil over.

I gave MVH a home-brewing kit two years ago for his birthday. He’s made about six batches, and I think he’s gotten better with each beer. He’s made everything from Amber Alert Ale to a very hoppy I.P.A. for our friend, KG, who insists it could go toe-to-toe with Bell’s Two Hearted.

MVH keeps a beer diary, recording the details of each batch. That’s how we started our latest adventure at Sinking Dutchman Brewery – with MVH double-checking the recipe, something he cobbled together from different sites.

The goal is an easy-drinking brau, something that tastes really beery, like New Glarus’ Naked. It should be ready by Aug. 6 – when we make our annual trip to a friend’s cabin in the U.P. 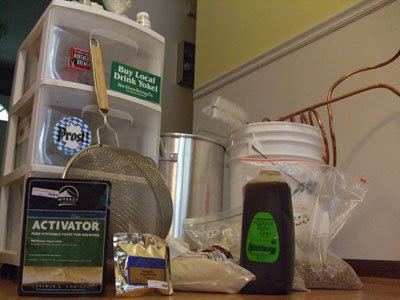 Beer-making ingredients and supplies sit in the kitchen.

But let’s back it up. The beer began in the kitchen, which was tidied to make way for an explosion of brewing equipment. About hour three into the process, all surfaces in the kitchen were topped with something related to beer.

There were brew books on the table, along with MVH’s beer diary – a purple, spiral-bound, college-ruled Pen-Tab notebook – and lids for the various pails.

Other supplies sat on the floor, including empty distilled water jugs, a 6-gallon “Ale Pail” filled with mineral-treated water, and an insulated box cobbled together by MVH.

On the counter was a quart of malt extract sitting in a stockpot of hot water, a 5-gallon pail with a spigot, and another pot used for boiling water.

And things weren’t even sticky yet. (The sticky part of the brewing process was something I had witnessed before. But MVH always took care of the mess. He usually brews when I’m out of the house.)

I’m not going to get into the ticky-tacky details of brewing, or even give a recipe. I want to share what the experience is like, and the conversations we had about making during the process. My goal is not a science report.

Here is a quick look at how it’s done:
1. Combine grains in mash tun.
2. Activate yeast by smacking packet.
3. Create mineral-treated water.
4. Heat mineral-treated water to 145 degrees; pour it over grains in mash tun.
5. Place mash tun in insulated box; stir grains every five minutes for 30 minutes.
6. Add more boiling mineral-treated water to grains; let grains rest for 30 minutes.
7. Combine grains/water mix (called wort) with more hot mineral-treated water in lauter tun. The lauter tun is two stacked pails; the inside pail has holes in the bottom, and the outside pail has a spigot.
8. Drain the wort from the lauter tun into the brew kettle. The solids are strained from the wort in the lauter tun.
9. Add powdered malt extract, hops pellets, and liquid malt extract. Stir between each addition.
10. Bring wort to boil. Boil for 60 minutes.
11. Cool wort for 15 minutes using immersion wort chiller (a coiled tube of copper with water running through it).
12. Transfer wort to primary fermentor.
13. Add yeast; seal fermentor. The mineral-treated water is made from distilled water.

After that, you’re done for about a week. And you’re pretty ready to be done with brewing, because it’s taken most of a day. You’re thinking, “The beer better be GOOD.” At least, that’s what I was thinking.

MVH was very apologetic. He said he was surprised that brewing took so long – a healthy six-and-half hours (not including cleanup). Now, most of the hours were filled waiting and babysitting. Temperatures had to be exact, and we didn’t want any boil-overs. Brewing mostly is passive and messy. (Drinking often is passive and messy, so I guess it’s appropriate.)

It’s an experience filled with textures and smells. The grains are dry and dusty, and the wheat smells savory. The odor of grains before they contact yeast is soft and round, but big. The malt syrup is sticky and thick, and its sweet smell has an unrefined quality.

My favorite part was boiling the wort. As it came to a boil, the fragrance of hops became more pronounced – sweet, sharp, and grassy. Hops are treble to the bass of the wheat and malt. Standing over the kettle, waves of beery steam filled my nose and made my mouth water. MVH binds together the copper coils of the immersion wort chiller.

The brewing process is supported by homemade tools. During one of our many periods of waiting, MVH bound together the coils of his immersion wort chiller to make it sit completely submerged in the wort, allowing it cool the liquid more efficiently. He said it took him about 40 minutes to make the chiller, and it cost about $20. He saw a chiller at the brew store for $100.

MVH also made the lauter tun, which involved buying two five-gallon pails from Farm & Fleet and drilling many tiny holes in the bottom of one of them.

The insulated box also is an MVH creation, although he joked about how junky it looks. It’s a beat-up cardboard box fitted with two pieces of Styrofoam – a top and a bottom. The Styrofoam is made of pieces of packing material from work and from Styrofoam that once surrounded a computer monitor. The pieces of plastic foam are held with clear packing tape. The whole box looks like an organized pile of moving-day trash, but it works great at keeping the wort warm. This idea of making stuff to make stuff struck a chord with me during the brewing process. Brewing itself is time-consuming and meticulous, and before you can do it, you need these tools, which you have to make yourself. (True, you can buy the equipment. But the point is that you can’t brew without it.) Brewers don’t phone it in.

MVH said his favorite part of brewing is the combination of technical details and craftsmanship. He said he likes how it forces him to take time to think. He doesn’t view it as cooking, though the result is potable. When he’s brewing, he thinks only about the process. A good end product is the ultimate goal, but the goal of our six-and-half hour beer odyssey was to concentrate on and to enjoy the process.

MVH asked me how brewing compared with baking. Baking is much more immediate, unless you’re making yeast bread, and the chemistry of yeast bread and beer is pretty much the same. (Both call for periods of rest.)

I also like taking nips of baking ingredients, which you really can’t do with brewing ingredients. (Grains get stuck in your teeth.)

Unlike brewing, I have a good sense of how a baked good will turn out if I try the batter or dough. Trying beer before it is finished is like catching a drag queen out of costume at the grocery store. The beer is the opposite of everything you know a beer to be: It’s warm, flat, and not boozy. You get a little bit of its taste, but with the other elements of the drinking experience eliminated, the taste is completely out of context.

Still, after hours of babying a brau, from grains to wort to beer, you try it anyway. I did. Ours has a nice sweet, wheat flavor with a notable hops finish. (Doesn’t that sound fancy?) The color may be dark for a wheat beer, but it’s still golden and lovely. 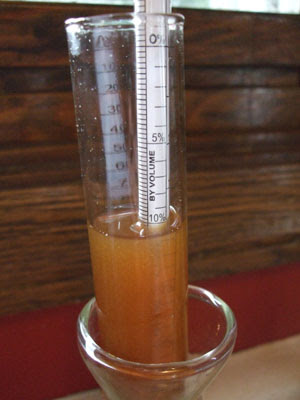 We made a big, boozy beer.